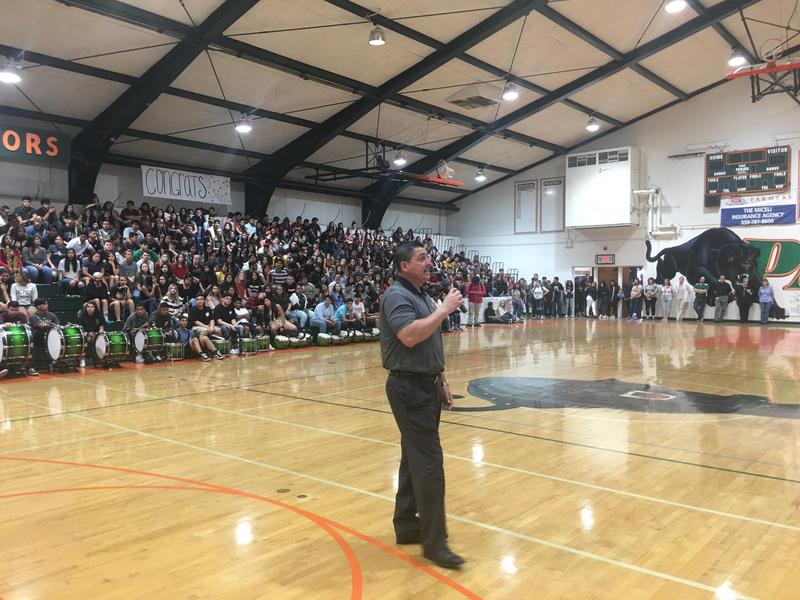 CAASP Rally promotes students to do their best.

Beginning next week the 11th-grade students will begin CAASP testing. In anticipation of the test and to congratulate the senior class on their phenomenal test scores last year the PHS Administration hosted a CAASP Incentive rally for the junior and seniors of PHS. Seniors that met or exceeded standards on the CAASP last year were entered into a raffle for chances to win prizes, PHS spirit gear was given out to the students, and speakers encouraged the students to do their best and be their best at PHS. To learn more about the CAASP test go to http://www.caaspp.org/.
Read More »

What happens when two totally opposite personalities are forced to live together? The result is Neil Simon’s comedy, The Odd Couple: Female Version. The play takes place in the apartment of Olive Madison, a news show producer living in 1980s New York. At the weekly Trivial Pursuit game, Olive and her friends joke, complain, and gossip about their various problems. Their friend, Florence Unger, is late to the weekly gathering, and they soon learn she is despondent about her husband’s sudden decision to ask for a divorce. Florence arrives in a desperation state, and Olive offers to take her in as she tries to straighten out her new life. The problem is, Olive is extremely sloppy and Florence is a neat freak. The battle is on as each seeks to change the other; throw in two romantic brothers named Manolo and Jesus, add a burnt dinner or two, and you have the recipe for a comic masterpiece!

The Odd Couple: Female Version has a long and colorful history. In 1965, Neil Simon first presented this idea in The Odd Couple, a play about two divorced men named Felix and Oscar who were forced to live together under increasingly stressful circumstances. It became an instant hit on Broadway and was soon turned into a successful 1968 film starring Jack Lemmon and Walter Matthau. During the 1970s, it became a popular T.V. series starring Tony Randall and Jack Klugman. Simon decided to revisit the idea in the 1980s, but chose to examine it in a feminine perspective by turning the lead roles into women. Felix and Oscar became Flo and Olive. This lead to The Odd Couple: Female Version, which appeared on Broadway in 1985 with Sally Struthers and Rita Moreno taking over the main roles. Other T.V. incarnations include The New Odd Couple (1982-1983) with an African American cast featuring Ron Glass and Demond Wilson, and the current edition (also titled The Odd Couple) which started in 2015 starring Matthew Perry and Thomas Lennon.

Monday, September 7th there is no need to wait in line to pick up your Spring 2019 class schedule. Schedules can now be accessed on your Aeries account. Login today and save time on Monday morning! (Use the Aeries link on this webpage to access.)
Read More »

The Porterville Panthers are gearing up for Friday's big game against the Tulare Western Mustangs, and ABC 30 was there to capture all of the excitement. Check it out here.
Read More »

Please take a moment to complete this survey.
Click here to open the survey for parents or teachers.
Read More »

After being selected personally by Buck Shaffer to take over the reigns of the Porterville High School Panther Band and following in Buck’s larger-than-life footsteps for 27 years with his own legacy of greatness, it is only fitting that Jim Kusserow has now taken his rightful place alongside his mentor and other PHS greats with his own plaque on the Porterville High School Wall of Fame.
Read More »

Mr. John Gonzales and his incredible students were featured in the New York Times. Click here to link the article.
Read More »

Your school needs you to complete this online survey to learn more about your opinions about it. This survey is an opportunity to communicate your perceptions about your child’s school.
Read More »
RSS Feed